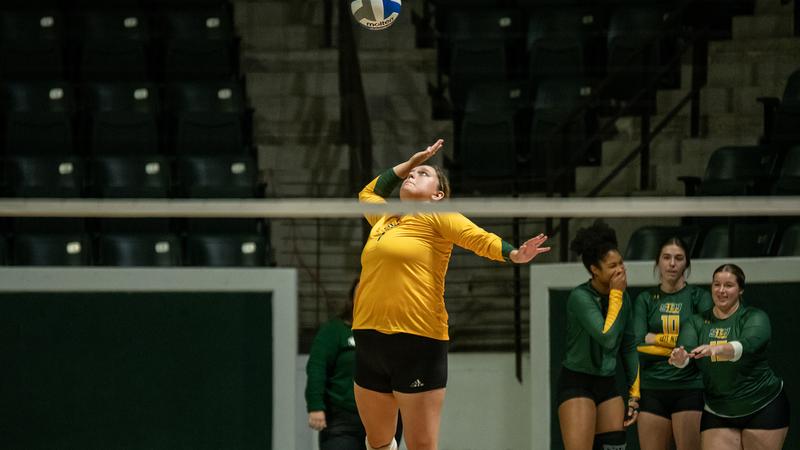 HAMMOND, La. – The Southeastern Louisiana University volleyball team was stretched to four sets in its match against Lamar, but double-doubles from Kailin Newsome and Addie Vidrine helped the Lady Lions push past the Cardinals 3-1 (25-22, 24-26, 25-17 , 26-24) Thursday evening at the University Center.

The Lady Lions had to hold off the Cardinals in the first set. After getting up to a 21-16 lead, Lamar rallied to make it a one-point set at 23-22. But kills by Ryley Boyne and Addie Vidrine got the Lady Lions the points needed to close out the set and take a 1-0 lead.

SLU would not be so fortunate in the second set. The Lady Lions jumped on the Cardinals quickly, getting up 8-2 following another kill by Boyne. They would later lead by margins of 12-5, and later 18-12 following an ace by Kailin Newsome. But Lamar scored seven of the next eight points to tie things up at 19-19. The Lady Lions had their chance, getting on set point at 24-23 following a Newsome kill, however, Lamar scored the next three points to steal the set and tie the match at 1-1.

With the score tied at 5-5 in the third set, the Lady Lions scored on ten of the next 13 points to open a 15-8 after another kill by Newsome. This time, SLU would not allow a Lamar comeback, keeping the Cardinals at bay and a Ryley Boyne tap down ended the set in SLU’s favor at 25-17, putting the Lady Lions back on top in the match, 2-1.

Closing out the Cardinals would not be an easy task. The fourth set went back and forth as the two teams traded mini-runs and swapped the lead. The Lady Lions found themselves trailing 22-21 when a Kailin Newsome kill tied things back up. A kill by Hannah Brewer put SLU on match point, but Lamar scored the next two to force extra rallies. Another kill by Brewer again put the Lady Lions on match point and this time there would be no answer from Lamar as a Ryley Boyne attack couldn’t be corralled by the Cardinals to close out the match, 26-24.

The serve was friendly to the Lady Lions as SLU scored 19 points directly on the serve, ten on SLU service aces and nine through Lamar service errors. However, play at the net kept the Cardinals in the match as Lamar scored 14 points through blocks, compared to six points through blocks for SLU. All the blocks allowed Lamar to have the better attack percentage at the end of the match, .237 to SLU’s .189.

The Lady Lions (15-4, 5-2 SLC) are now off for the next week. SLU returns to action next Thursday, looking to turn their fortunes around in true road matches, as they head back into Texas for a match against Texas A&M-Commerce for a battle of Lionesses. Opening serve against the Lions (5-14, 2-4 SLC) is set for 6:00 PM at the TAMUC Field House.

All membership fees and donations to both the Diggin’ It Club and S Club (volleyball) are available for the exclusive use of the Southeastern volleyball program. Membership information is available by contacting the Lion Athletics Association at [email protected] or (985) 549-5091 or visiting www.LionUp.com.