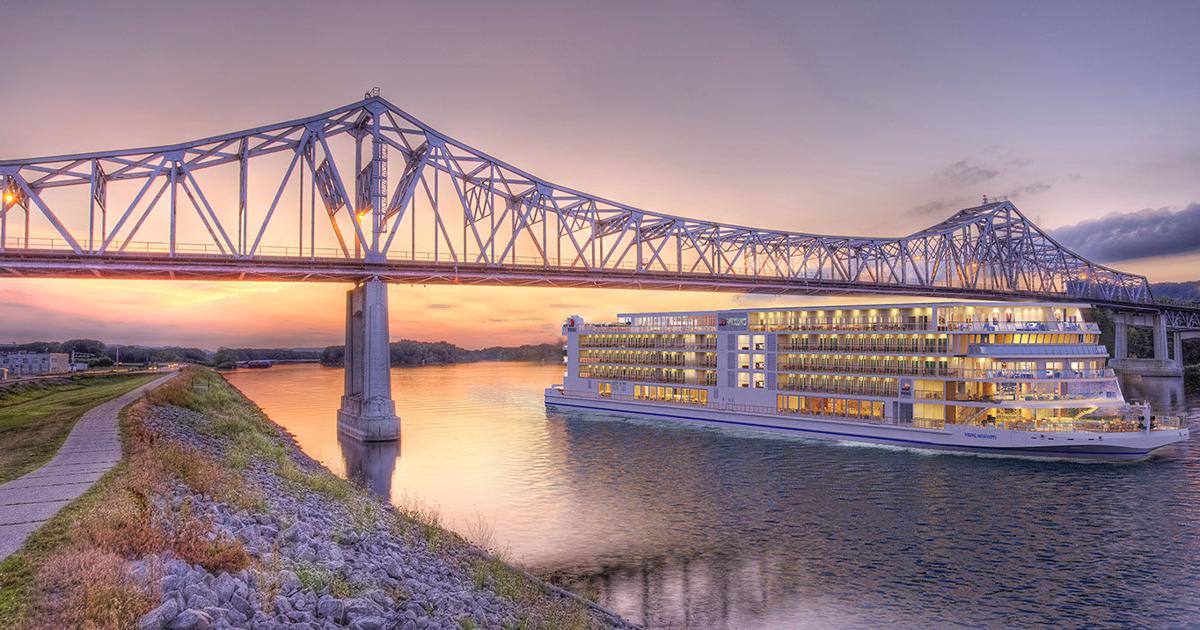 The Viking cruise ship, which was supposed to launch from New Orleans, has canceled its two-week trip on the Mississippi River due to low water levels south of St. Louis.

Lack of rainfall in recent weeks has left the Mississippi River approaching record low levels in some areas from Missouri south through Louisiana. The US Coast Guard said at least eight “groundings” of barges have been reported in the past week, despite low-water restrictions on barge loads.

As a result, dozens of tows and barges were lined up in both directions, waiting to get by. The stoppage also brought a halt to the cruise ship with about 350 passengers on board, said R. Thomas Berner, a Penn State professor emeritus of journalism and American studies, and one of the passengers.

The Viking ship was originally supposed to launch from New Orleans on Saturday, but the water there was so low that the launch was moved to Baton Rouge, Louisiana, Berner said.

By Tuesday, the ship was halted near Vicksburg, Mississippi, due to the backup caused by the grounding. It wasn’t near a dock so passengers couldn’t leave. The ship’s crew kept people entertained as much as possible with music, games and other activities.

“Some of us are taking naps,” Berner joked.

The stuck barges were freed midday Tuesday. Berner said the cruise ship restarted Tuesday night, but the restart didn’t last long: Viking told passengers in a letter Wednesday that the rest of the scheduled two-week trip was being called off, citing low water problems causing additional closures. Viking made arrangements to get passengers home and the letter said they would get a full refund.

Barges idle while waiting for passage in the Mississippi River near Vicksburg, Miss., on Tuesday, Oct. 4, 2022. The unusually low water level in the lower Mississippi River is causing barges to get stuck in the muddy river bottom, resulting in delays. The US Coast Guard said Tuesday, Oct. 4, 2022, that at least eight “groundings” of barges have been reported in the past week, despite low-water restrictions on the barge loads. (Thomas Berner via AP)

Nearly all of the Mississippi River basin, from Minnesota through Louisiana, has seen below-normal rainfall since late August. The basin from St. Louis south has been largely dry for three months, according to the National Weather Service.

The timing is bad because barges are busy carrying recently harvested corn and soybeans up and down the river.

Lucy Fletcher of the agricultural retailer AGRIServices of Brunswick, who serves on the board for the St. Louis-based trade association Inland Rivers, Ports & Terminals, said navigation woes on the Mississippi, Missouri and other major rivers have some shippers looking at other means of transportation.

“Can they divert to rail?” Fletcher asked. “Well, there’s not an abundance of rail availability. And usually people are booking their transportation for fall early in the season. So if they haven’t booked that freight already, you’re going to see people in dire straits.”

Fletcher said that with the supply chain still snagged following the COVID-19 pandemic, trucks also are largely booked and unavailable.

A barge moves north on the Mississippi River under the Interstate 40 bridge connecting Tennessee and Arkansas on Thursday, Sept. 29, 2022, in Memphis, Tenn. US Coast Guard officials say they have responded to eight groundings of barges because of low river levels in the Mississippi between Memphis, Tenn., and the river’s mouth. (AP Photo/Adrian Sainz)

Mike Steenhoek, executive director of Soy Transportation Coalition, said 29% of the nation’s soybean crop is transported by barge. He estimated that barge capacity is down by about one-third this fall because of limits on the tows caused by the low water. That reduced capacity at a time when demand remains high is contributing to a 41% jump in barge shipping prices over the past year.

Matt Ziegler, manager of public policy and regulatory affairs for the National Corn Growers Association, said about 20% of the corn crop is exported, and nearly two-thirds of those exports typically travel down the Mississippi River on barges before being sent out of New Orleans.

To keep river traffic flowing, the Corps of Engineers has been dredging the Mississippi at several spots and placed limits on the number of barges each tow can move.

The forecast for much of the Mississippi River basin calls for continued dry weather in the near future. Fletcher is hopeful the winter will bring some relief.

“We need a good year for lots of snow melt,” she said. “The whole system’s just going to need some water.”

Chewacla State Park In Alabama Is Home To A Stairway Waterfall