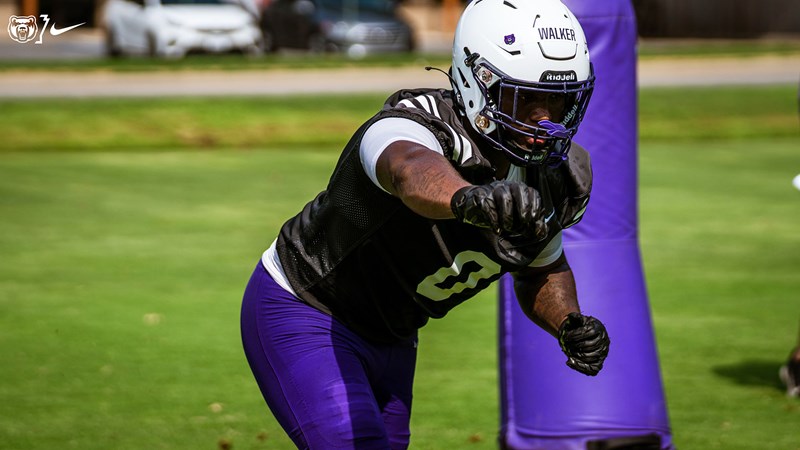 CONWAY, Ark. _ The University of Central Arkansas Bears, while not ready for the Sept. 1 season opener just yet, did enough good things in Saturday morning’s scrimmage to have head coach Nathan Brown feeling good about where his team stands with 19 days remaining before the opener.

“I think it was good for us to get in front of some real officials today for the first time with this group,” said Brown. “We’ve done a lot of situational work in practice, but to roll the ball out there and hit just about every situation you’re going to come across in a football game, plus to have the referees out there to throw flags when they It was good for our guys to see some things we needed to work on.

“But the effort was there. We ran about 115 plays and we stayed healthy, we scrimmaged hard, and really you saw a lot of plays made on both sides of the ball. We’re getting closer and closer… each day that goes by is a closer day to Missouri State on Sept. 1. And I think our guys are feeling that, but they also know it’s not time to get ready for those guys yet.

“I think today was a good wakeup call for us. We did a lot of good things, but I think we could also see that we’re not ready to play a game yet.”

Brown singled out the defensive front as a unit that stood out Saturday.

“(Junior transfer) Noah Mitchell, at the linebacker position, was flying around the football all day. He had the only turnover of the day with an interception late in the scrimmage. He seemed to flash throughout the day. He’s got star potential at the linebacker position. He was a 100-plus tackle guy at Pearl River (Community College), and obviously signed with the University of Texas-San Antonio. So you know he’s got the ability.

“We had him out in the spring with a knee injury, so he’s just now getting himself worked into shape. But you can tell he’s got a chance to be a really good linebacker for us.”

On the offensive side, transfer quarterback Will McElvain continued his steady play, while transfer wide receiver Trustin Oliver caught Brown’s eye as well.

“I thought Will McElvain had another really solid day, protecting the football, getting it where it needs to go,” said Brown. “And I think out offensive line gave him a good amount of time for the most part all day.

“Probably the standout on offense, skill position-wise, was Trustin Oliver. He’s really come on this first two weeks of fall camp. You can see that he has the potential to be a big-play receiver. The physical (look) is not going to be an issue with him.It’s just catching up to speed with the position.

“He played defensive back when he originally signed with the University of Colorado. And we’ve kind of transformed him into a wide receiver. He has the ability, but you’re just starting to see it really put into action. It’s just him getting more comfortable and more confident.”

Brown said Sunday will consist of meetings and film evaluation, with a return to the practice field on Monday.

“We’ll come back for a three-day stretch Monday through Wednesday morning, and really have three heavy practices, working situational football and continue with the physical side of fall camp. We’re still in that mode.

“But I know this, we’re trending in the right direction. And I continue to say, I love this team. I think we’ve got inexperience, but we’ve got a lot of talent. And you’re beginning to see a lot of that talent starting to gel. And that obviously puts a smile on my face as the head coach.”

UCA opens the season on Sept. 1 against Missouri State on “The Stripes” at First Security Field at Estes Stadium.

Burn bans will continue to expand across Arkansas

All counties in Arkansas under high risk of wildfire danger,…