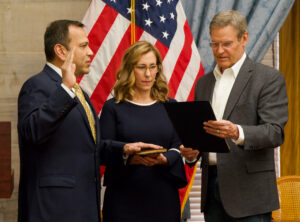 Two Memphis lawmakers are raising concerns about the state’s decision to cut federal HIV funding from nonprofit agencies and direct it through metro health departments, saying such a move could endanger lives.

State Rep. Antonio Parkinson is asking the Tennessee Department of Health why it is cutting HIV funds received through multi-million dollar grants from the Centers for Disease Control. He contends the Department of Health shouldn’t “play politics” with the money because HIV prevention and treatment is needed statewide.

The Memphis Democrat sent a letter this week to the department requesting an official explanation for the end to HIV funds by June 1.

“I want to know why and how that decision came down,” Parkinson says.

The Associated Press reported documents show the state planned to cut HIV funding from Planned Parenthood and to stop a partnership with the organization for HIV testing even before the state made the decision to end the funding for nonprofits. Planned Parenthood has been a target for anti-abortion lawmakers and top state officials for years.

It’s irresponsible to deprive trusted organizations in our community (of) giving non-controversial lifesaving treatment, testing and prevention for HIV.

Dr. Ralph Alvarado, a former Kentucky state senator and 2019 Republican candidate for lieutenant governor there, was appointed commissioner of the Tennessee Department of Health by Gov. Bill Lee shortly before the funds were cut. Alvarado is set to address the Senate Health and Welfare Committee Wednesday at 1:30 p.m.

Dr. Amy Gordon Bono, a primary care physician, said Tuesday she hopes Alvarado will explain the decision. She pointed out Davidson County organizations such as Nashville Cares and Nashville Health have been providing HIV services for years where the “most vulnerable populations live.”

“Does Dr. Alvarado really think that our Metro Health Department has the infrastructure and staffing in place to provide these same services?” Bobo says. “And, more critically, will those who need these services be able to access them if they are not conveniently located in their communities?”

More than 20,000 Tennesseans live with HIV, and 14% with the disease don’t realize it, according to reports.

Even though funds are supposed to go to the state’s six largest health departments, Gov. Lee said last week the state will continue to use some nonprofit agencies for HIV services. He admitted the details haven’t been worked out.

Gov. Bill Lee swears in Dr. Ralph Alvarado, pictured with his wife and Lee, as commissioner of the Tennessee Department of Health on Jan. 17. (Photo: tn.gov)

“The purpose of this is to make sure that we spend the dollars in the way that best serves Tennesseans and that best mitigates and prevents HIV spread in the community, particularly focusing on human trafficking victims, on the transmission to first responders, on transmissions from mothers to their babies,” Lee said.

However, state Sen. London Lamar says in order to be a “pro-life state,” Tennessee should ensure the funds are reaching people who need them.

Planned Parenthood is already prohibited from providing abortion treatment under the state’s new law, and now the state is “attacking” the organization to stop it from providing other types of health care, Lamar points out.

Restricting those services for nonprofit organizations puts people at risk of spreading HIV, in part because of a lack of trust for health departments and poor access to them, Lamar points out.

Parkinson says he doesn’t know whether the funding withdrawal is designed to punish specific organizations.

“I hope that it’s not political like that. I hope and pray it’s not, because we don’t need to put politics over the lives and health of the people of Tennessee,” Parkinson says.