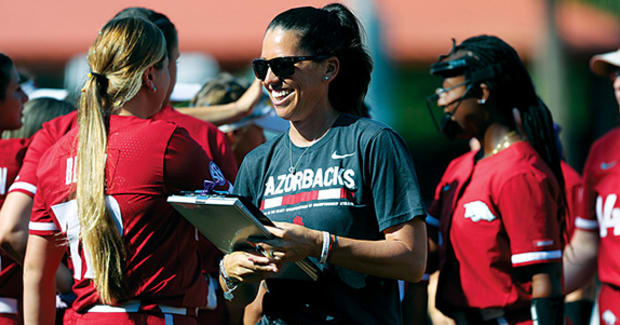 GAINESVILLE, Fla. – Want to know how good Arkansas softball coach Courtney Deifel is? Razorback fans actually know who she is.

Even though she now has back-to-back SEC championships, took her team to the SEC tournament finals for the first time this century, and won it for the first time ever, there can be no higher compliment to the newly named SEC Coach of the year than fans knowing who she is.

Arkansas Razorback softball coach Courtney Deifel gets bathed in Gatorade during her postgame interview with ESPN following the team’s 4-0 shutout of Missouri in the SEC tournament championship game at Florida. It was the Razorbacks’ first appearance in the championship this century and the team’s first ever tournament title.

Somewhere out there should be a meme of Arkansas athletics director Hunter Yuracheck’s head replacing Robert Downey Jr. in the Iron Man gear while Dr. Strange let’s him know he’s looked at 14,000,605 outcomes, indicating there’s only one way where the Razorbacks win the SEC championship and the SEC tournament – ​​hire Deifel.

Let’s lay out the odds Deifel was up against historically. I graduated in 1996 at a 4A school in Arkansas that was nuts about athletics and had tremendous softball players in its building, yet there was no softball team. There were few softball teams in the state at all at the time, and many of the teams that did exist played slow pitch.

It wasn’t until I happened upon a softball game at the University of Central Arkansas that I knew fast pitch softball was a thing. Watching girls whip the ball in so almost was as mesmerizing as the first time I walked past a bottle of Pepsi Clear next to a bottle of 7-Up Gold at the Piggly Wiggly.

Unbeknownst to me and much of the state, Arkansas started a softball team in 1997. I covered the Razorbacks on and off from 2000 until now and cannot recall being aware there was a team until a couple of years after Deifel arrived.

It’s not like there has been much reason to notice the team. Before Deifel, no coach had produced an overall winning record, won an SEC title, won an SEC Tournament, nor advance to Super Regionals. The Razorbacks generated one All-American when Miranda Dixon made the 3rd team as a utility player in 2010 and one SEC award winner with Devon Wallace’s Freshman of the Year Award in 2012. 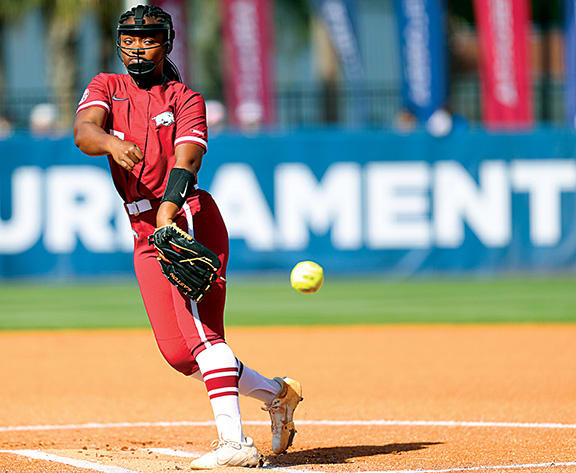 It seems like a no-brainer that Deifel can stock her roster with talent from coast to coast, including from the “Big 3” of California, Texas and Florida. But that’s the perspective for fans who just joined the party these last couple of years.

The reality is Deifel inherited a program with no tradition and not a lot to work with. She went 1-23 in the SEC her first season.

So she hit the road with a philosophy that has been repeated time and again in interviews with players about why they came to Arkansas. Make players feel like they matter, make them feel loved, and make them feel like family.

The culture changed almost immediately and word got out among recruits. There was something special about Arkansas.

In 2017, Arkansas made the NCAA Tournament in the first of what is now six consecutive seasons. The following year, the Razorbacks made the Super Regional.

As transfers like Sides and Delce made their way to Fayetteville, they not only were taken in as family, they were encouraged to share drills and techniques that had worked at their previous programs, providing immediate buy-in and connections so they would not feel or be seen as “outsiders.”

What it has culminated in is a roster that has the makings of “that darn team.” That one team that gets hot, feels magical, and never looks back because it’s their destiny.

This team can win in every way possible and showed it over the course of the SEC tournament.

Arkansas can crush you with the long ball. They lead the SEC with 102 homers and have hitters all through the line-up who either have or are right at 20 home runs.

If it has to turn into a game of small-ball, Deifel can turn to multiple burners on the base pads while relying on a roster that hits .342 as a whole.

And down somewhat in the vicinity of where the third base coach’s box is located is Deifel moving back and forth with her frenetic energy waiting for the chance to run to home plate to be the first to greet her players when they score, matching her team’s emotion in celebration.

Some may describe it as Deifel capturing lightning in a bottle, but it’s more like she has gathered a massive storm that slowly built up on the horizon and is now sending coaches across the country scrambling to warn their teams to take cover.

Because of this, Razorback fans see you Courtney. They see you.

And that’s a huge accomplishment.

TREYLON BURKS ONLY MAKES IT 20 MINUTES IN FIRST TITANS’ PRACTICE

HOW IT HAPPENED: LIVE BLOG OF HOGS’ LOSS TO VANDERBILT

• Want to join in on the discussion? Click here to become a member of the allHOGS message board community today!