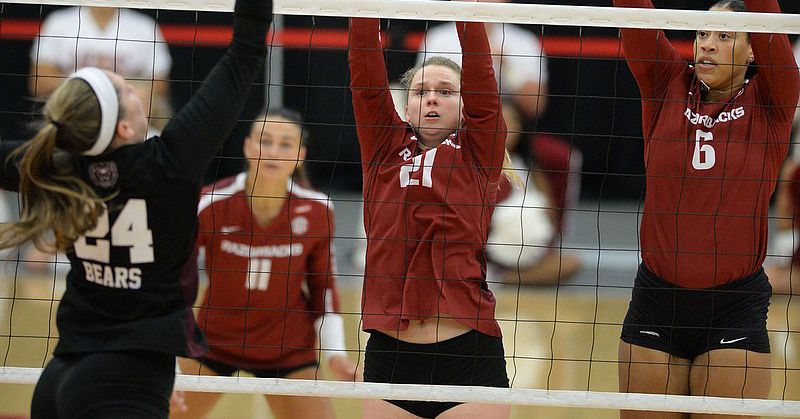 FAYETTEVILLE, Ark. — Coming off a season that ended with a bid to the NIVC and a loss to UNLV, the Arkansas volleyball team is poised for a run at a NCAA bid. Showing signs of a promising year they took 5th ranked Kentucky to 5 sets in both matches before falling 3-2 each time. Arkansas is picked to finish 4th in the SEC has one of the deepest rosters in Coach Watson’s 7 years in Fayetteville . They have a balanced mixture of returning starters along with three transfers and two highly touted freshman.

Graduate senior Gracie Ryan is looking forward to her last season at Arkansas. Ryan, out of Orlando, Florida is moving up the all-time assist leaders at 5th and only needs 749 from finishing in the top three. Gracie was named SEC Setter of the week after recording 50 plus assists twice that week as well as three straight double doubles and recorded six blocks in the Tulsa Tournament.

Another returning starter and All-SEC performer is senior Jillian Gillen. Gillen is the lone Razorback on the All SEC Preseason team. She Led the Hogs with 4.12 kills per set which ranked her second in the SEC. With 1,261 kills Jillian joins 17 others in the 1,000 kill club and currently sits at 13th all time. Along with her All-SEC selection she was named SEC Scholar-Athlete of the Year for the second year in a row.

Senior Maggie Cartwright out of Kimberly, Wisconsin is the ace queen for Arkansas leading the way with 43 last season and led the team with service aces per set which was good for third in the SEC. Cartwright also added 273 kills, a season high for her as well as 300 digs on the year.

Sophomore Taylor Head started every match last season and finished second on the team in kills and kills per set. The 5-10 Junior from Winter Garden, Florida has been a huge presence since she stepped foot on campus and set or matched career marks in nine different categories last season including 13 double doubles last season. Was named the MVP of the Bobcat Tournament recording 40 kills and 7 aces.

The incoming freshmen include Kylie Weeks, a 5-9 outside hitter/libero from Elkhorn, Nebraska. Weeks won a state championship in 2020 and was named All State as well as a top 10 prospect in her state. Avery Calame, a 5-11 outside hitter from Plano, Texas surpassed 1,000 digs for McKinney-Boyd HS and was named to the 2021 AVCA All-America Watch List. Finally Skylar Ellison , a 6-1 middle blocker from Aledo, Texas had 161 kills and 11 aces in her senior season.

Arkansas has some key transfers in with Tatum Shipes Shipes, a 6’4 middle blocker, comes to Fayetteville as a graduate transfer by way of Auburn, where she played for the Tigers for the past four seasons. Shipes played her first collegiate season as a middle in 2021 and was one of the SEC’s best defensive players. She started every match for Auburn and ranked top in the conference for total blocks (142) and blocks per set (1.42), which also came in at 21st and sixth in the country. Both metrics are new Auburn single season program records in the rally scoring era, along with the top spot in block assists with 120.

Also coming to Fayetteville is hometown Sophmore Rosanna Hicks. Hicks Rosana Hicks is a hometown product who graduated from Fayetteville High School in 2021. A 6’1 pin hitter, Hicks is a former All-Arkansas Preps Player of the Year and had an excellent career with the Bulldogs. Over the course of four seasons, she amassed 1,250 kills at FHS and registered a .325 hitting percentage. Hicks led the Bulldogs in kills in each season. She was a three-time All-6A West Conference selection, an AVCA All-Region Team selection. She joins the Razorbacks as a sophomore

No. 11 Tennessee Picks Up 5-1 Exhibition Win Over Dayton

Burn bans will continue to expand across Arkansas

All counties in Arkansas under high risk of wildfire danger,…