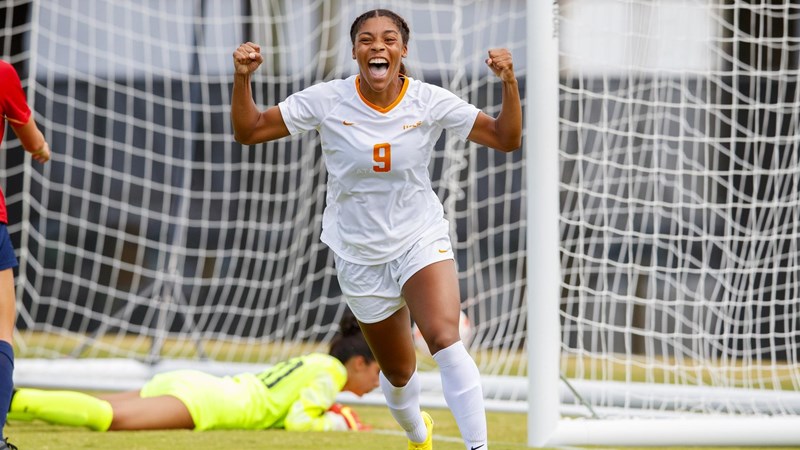 No. 11 Tennessee Picks Up 5-1 Exhibition Win Over Dayton

KNOXVILLE, Tenn. – No. 11 Tennessee collected a 5-1 exhibition win over Dayton at Regal Stadium on Saturday in the team’s final tune-up before the regular season.

In goal, redshirt-freshman Ally Zazzara got the start, playing 74 minutes and logging two saves. Freshman Abby Reisz closed out the game in the net, notching one save.

Fusco put Tennessee on the board in the eighth minute, slotting a shot low into the left corner from inside the 18-yard box off a pass from redshirt junior Jaida Thomas.

Dayton leveled it up in the 19th minute when Jessica Sheldon scored on a breakaway.

Eight minutes later, redshirt junior Maria Nelson threaded a pass through two defenders to find Huff breaking into the box. Huff one-touched it far post to put the Lady Vols back ahead 2-1.

George scored early in the second half, knocking one through several defenders from two yards out off an entry pass from Thomas.

Huff struck again in the 60th minute, converting on a penalty kick after graduate Hannah Zaluski was fouled in the box.

Simmonds rounded out the scoring for UT, getting a head on a cross from junior Maddie Eskin in the 65th minute and driving a goal near post past the Dayton keeper.
UP NEXT: The Lady Vols will open the season on the road, traveling to Chapel Hill for a 7 pm matchup against #10 North Carolina on Thursday at 7 pm ET. The game will be streamed on ACC Network Extra.