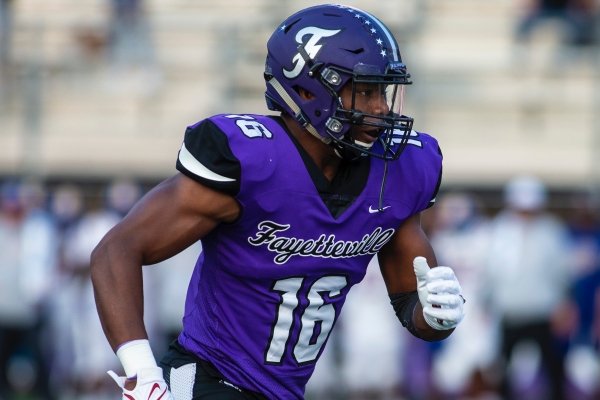 FAYETTEVILLE — A week before Mani Powell turned 19 on June 8, he had another reason to celebrate.

Powell, a freshman linebacker at the University of Arkansas, received word on June 1 that he was fully cleared to participate in summer conditioning drills.

Powell had spent the previous seven months recovering from surgery he underwent Oct. 21 on his left knee to repair damage to his anterior cruciate ligament and meniscus.

“It was lovely,” Powell said of getting the word from Arkansas’ training staff that his knee was strong enough to hold up to workouts. “I’ve been lifting weights, doing agility training, running, cutting, all of that stuff.

“Since then, I’ve just been rolling.”

Powell (6-2, 240) said he’ll be ready when the Razorbacks begin preseason practice in August.

An early enrollee in January, Powell did some individual drills last spring, but never got to do team work in pads.

“I’m full go for fall camp,” Powell said. “My knee is doing great. It’s sore when I’m done with workouts, but that’s part of being an athlete — being sore.

“That soreness goes away and then I’m ready to get back to work.”

More from WholeHogSports: Catalonia aiming to put himself back on the map in 2022

“Just looking at Mani every day, he’s bouncing back really quick — a lot quicker than I think most guys probably would have,” Hollingsworth said. “I know he’s put in a lot in a work, and he’s looking really good.”

“I think when Mani is fully healthy what everybody will see is a guy that’s really explosive,” said Fayetteville coach Casey Dick, who played quarterback at Arkansas. “A true sideline-to-sideline linebacker than can make plays in a variety of different ways, whether it’s on the edge or the ‘A’ gap to ‘C’ gap. He’s got that range and he’s got that mentality.”

Powell and his mother, Shaunta Michael, moved to Fayetteville last summer for his senior year of high school.

Staying in Canton to play for McKinley, Powell said, wasn’t a good option after a sudden coaching change in late June.

McKinley Coach Marcus Wattley and six assistants were fired amid accusations they allegedly punished a player for missing a voluntary workout by forcing him to eat a pepperoni pizza — which contained pork — against his religious beliefs, according to multiple published media reports.

“I was pretty tight with the coaches,” said Powell, who had 81 tackles, 14 tackles for loss and 4 sacks as a junior in seven games. “The people that came on staff as replacements, I wasn’t close with them.

“So it made me feel uncomfortable to play my last year there. I moved to the place where I would be getting my new start, which was in Fayetteville.”

Powell said everything impressed him about Arkansas.

“The coaching staff and everybody that had a part in my recruitment, they made me feel like a person they wanted here before they made me feel like an athlete they wanted on their team,” he said. “They sold my mom and sister [Euraezshia] — the two people I care the most about in this world — on calling this home before we went anywhere else to visit.

“Then I realized as I was taking my other visits that me and my family were comparing every place to Fayetteville and the Razorbacks. I knew this was home.

“My family coming with me to Fayetteville made it an easy move. Then being welcomed here the way I was and being taken in by the university, the high school, it was more than enough to help me get adapted in a super short amount of time.”

Dick said Powell was quiet his first couple of days after transferring to Fayetteville.

“But once Mani got settled in and was around our team, his true personality came out,” Dick said, “He’s a very outgoing kid and likes to have a good time. He loves to make people laugh.

“He was a fantastic addition to our team for the time that he was here and helped us in a lot of ways.”

“Mani’s got a big heart,” Dick said. “He loves being around little kids and being around family members. He’s become a part of our family and is a special person to us.

“My kids look up to him. He still comes over to the house.”

“I’m a kid myself,” Powell said. “I always have the energy to do whatever the kids are ready to do — swimming or running around or throwing the ball — and have a good time.”

Powell said he has a vivid recollection of what happened on the play when he was injured on Sept. 24.

“I was rushing the quarterback and then I went in and saw a lineman,” he said. “I was ready to hit him, but somehow he went on to somebody else and moved out of the way, and I started to stumble.

“I saw the quarterback maybe 4 feet away from me — if that — and when I tried to make a cut while I was stumbling, it just didn’t go well.

“I stayed on the ground, and when I got up, I had to lean a certain way for my leg to not give out on me.”

More from WholeHogSports: Latham is Mr. Versatility on Hogs’ O-line

Powell stayed engaged with the Bulldogs after his injury. He continued to attend practices and games all the way through Fayetteville’s 10-3 season that ended with a 42-38 loss to Bryant in the Class 7A championship game.

“Mani was always out there with our guys being part of the team and encourage the players whether he was on crutches or later when he was wearing a knee brace,” Dick said. “He was a true impact player both on and off the field.”

Powell said he wanted to support his new teammates, who had quickly become his friends.

“When I got injured, it was about me supporting guys that are part of my family in my eyes,” he said. “That was more important to me than going home and resting up after rehab.”

Powell said that shortly after he was injured, he got a call from Arkansas Coach Sam Pittman assuring him the scholarship offer stayed in place.

“Nothing changed,” Powell said. “Literally nothing at all changed with the university, the scholarship, communication, how the coaches were treating me or talking to me.

“If anything, the communication got even better. I talked to my coaches a little more, and we got tighter.”

While Powell’s knee has healed, he isn’t able to straighten out his left pinkie finger after injuring it as a junior.

“It’s called a boutonniere deformity,” Powell said, referring to being unable to move the tendons in his finger. “It ended up not going straight anymore. But I don’t really worry about that, because it doesn’t affect me as a football player.”

Our View: Alabama has grown into its place on the world stage | opinion