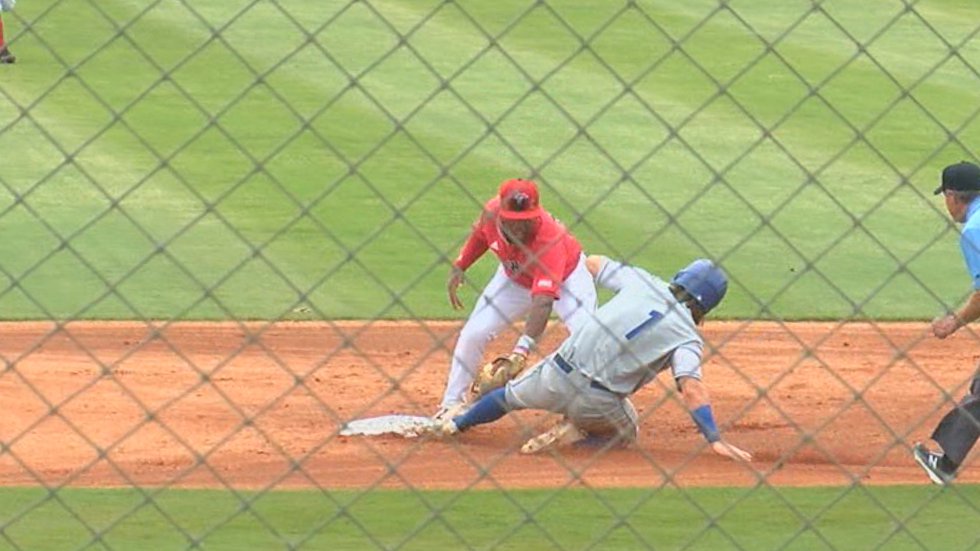 JONESBORO, Ark. (KAIT) – Arkansas State baseball tied it in the seventh with back-to-back home runs, but an eighth-inning run and strong relief outing by Seth Clark moved Georgia State past the Red Wolves 5-4 on Sunday at Tomlinson Stadium- Kelfield.

Brandon Hager recorded two of the Red Wolves’ six hits, while Jaylon Deshazier drove in two with a double in the fifth. The two RBI moved Deshazier into sole possession of seventh all-time at A-State in career runs driven in (127).

In his final outing at Tomlinson Stadium, Carter Holt pitched 5 1/3 innings, allowing four runs (two earned) on four hits before handing off to Tyler Jeans with one out in the sixth. Jeans (3-5) tossed the final 3 2/3 innings, striking out four and allowing one run on four hits.

GSU starter Brandon Kaminer pitched four shutout innings and allowed one hit, while striking out four and walking four. Joseph Brandon allowed two runs on three hits in two-thirds of an inning, walking a batter before Clark entered to get the final out of the fifth. Clark (5-0) earned the win, allowing two runs on two hits – the Red Wolves’ homers in the seventh.

Three players registered multiple hits for Georgia State, with Luke Boynton driving in two runs on a pair of hits. Cameron Jones went 2-for-3 with a run scored, as did Dalton Pearson.

Holt faced the minimum in the first two innings before the Panthers struck first with three runs in the third. A walk and single led off the inning before a sac bunt moved the runners into scoring position. Jesse Donohoe scored from third when Josh Smith reached on a fielding error. A single by Boynton then drove in two more runs, plating Pearson and Smith before a flyout ended the inning.

A-State clawed back with a pair of runs in the bottom of the fifth on a two-run double by Deshazier, but could not push the tying and go-ahead runs across, leaving the bases full.

Georgia State added a run in the top of the sixth to stretch its lead to 4-2 when Boynton scored on a fielder’s choice.

The Red Wolves knotted it up in the bottom of the seventh on back-to-back home runs by Klutts and Brandon Hager, their 10th and eighth long balls of the year. GSU responded with a run in the top of the eighth on a pinch-hit RBI single by JoJo Jackson to score Jones from second, making it 5-4.

Georgia State threatened in the top of the ninth, but Hager threw out a base-stealer at third before Sam Fagan made a diving catch for the final out. Clark then retired the side in the bottom of the ninth to end the contest.

A-State closes out its 2022 home slate with a midweek contest against Ole Miss Tuesday. First pitch against the Rebels is slated for 6 pm and will be shown on ESPN+. The radio broadcast can be heard on The Ticket Radio Network stations 95.3, 96.9, 104.1 and 970 AM.