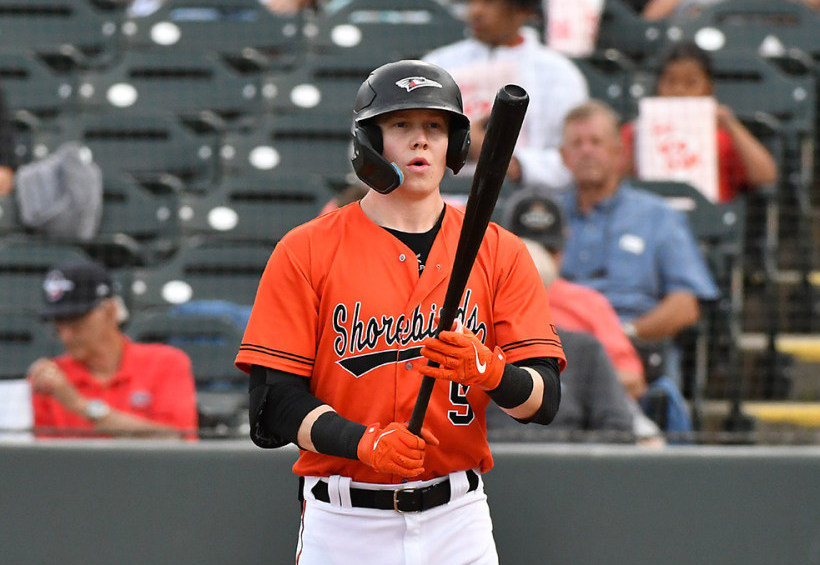 It took two years longer than many expected, but Heston Kjerstad is finally back to doing what he does best — mashing baseballs.

Plagued by multiple setbacks, the former Arkansas standout and No. 2 overall draft pick finally returned to the field for a real game last month and has done nothing but rake in the three and a half weeks since.

Kjerstad is slashing .418/.500/.597 with two home runs and 12 RBIs in 18 games for the Delmarva Shorebirds, the Baltimore Orioles’ Single-A affiliate in the Carolina League. He also has six doubles, 14 runs and eight walks with an impressive 1,097 OPS.

Those are the kind of numbers he was putting up with the Razorbacks back in 2020, when his third — and final — season in Fayetteville was cut short by the pandemic, but the path to this point has been long and winding.

“It’s been a journey to get to this moment these past couple and also the other years of my life growing up and playing high school and college baseball and then hit a little bump in the road the past little bit, things I had to persevere through ,” Kjerstad told reporters before his debut last month. “It’s been a lot of patience, it’s definitely different feelings, some different emotions, but most importantly, just excited to be out there playing baseball again.”

The pandemic likely robbed Arkansas fans of a historic season by Heston Kjerstad.

As a junior, Kjerstad started the 2020 season on a tear. Through the first 16 games, before the weather even warmed up, he was already hitting .448 with five doubles, six home runs and 20 RBIs, plus had an insane 1,304 OPS.

He likely wouldn’t have been able to maintain such a high batting average as the Razorbacks entered SEC play, but it probably isn’t a stretch to say he definitely would have been a first-team All-American and likely a candidate for the Golden Spikes Award.

Even without the rest of his final season, though, Kjerstad still did enough in college to assert himself as a top-10 prospect in the 2020 MLB Draft. The Baltimore Orioles surprised the baseball world by jumping up and taking him No. 2 overall — making him the second-high drafted Arkansas baseball player ever, behind only Jeff King (No. 1 overall in 1986).

Kjerstad immediately became the third-best prospect in the Orioles’ farm system, according to MLB Pipeline. Unfortunately, the same thing that canceled the rest of Arkansas’ 2020 season also kept him off the diamond, as he developed myocarditis — an inflammation of the heart wall — after a bout with COVID-19.

It wasn’t until last August, about 14 months after he was drafted, that Kjerstad was finally able to resume physical activities. That had Baltimore officials hopeful he’d be ready in time for spring training this year.

Sure enough, Kjerstad was cleared and attended the Orioles’ minor league camp in Twin Lakes, Fla., to begin training for the 2020 season.

“His cardiac issues continue to look like they’re behind him,” Orioles GM Mike Elias told reporters in March. “We’re going to stick with him and get him past this.”

Just as he was getting geared up, though, he suffered a “higher grade” left hamstring strain diving for a fly ball in an intrasquad game on March 11 — exactly two years after he last wore an Arkansas uniform.

The injury didn’t require surgery, but it did sideline him for nearly three months.

It wasn’t until June 10 — exactly two years after he was drafted — that Kjerstad finally made his professional debut.

“I’ve learned a lot going through the struggles I had to go through the past little while,” Kjerstad told reporters. “The main thing is just how, even when times are rough, there’s always going to be light at the end of the tunnel and you’ve just got to take it day by day.”

Now 23 years old, Kjerstad is still viewed as a top prospect in Baltimore’s system, but he’s slipped to No. 9 on MLB Pipeline’s list for the organization. He’s the only player among the top 17 who are playing at a level lower than Double-A.

The Orioles are understandably taking things slowly with Kjerstad, but he hasn’t seemed to skip a beat despite going nearly 27 months between live games.

In addition to the incredible numbers listed above, Kjerstad had a 14-game hitting streak snapped with an 0-for-4 outing Monday, but has hit safely in 16 of 18 games. That includes 10 multi-hit performances.

Kjerstad still drew a walk in Monday’s game, plus he had an RBI in his only other hitless outing, so he’s been productive in every game as a professional.

It took him 10 games before his first home run, with the ninth-inning blast to left-center showingcasing his power to all fields. That’s the moment Kjerstad told himself, “Okay, I’m back.”

“I never thought my first professional homer would be in 2022, but everybody has a little different journey,” Kjerstad said after the game. “It’s unreal. Every homer you hit is the best feeling you get playing the game, without a doubt, but without having had that feeling for a long time, and everything I’ve been through, it was electric. It got my blood pumping.”