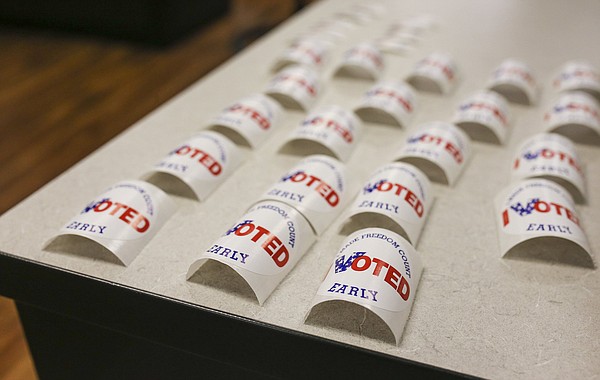 Sales taxes, liquor sales among the issues for River Valley, Northwest Arkansas voters to decide May 24

A sales tax extension in Fort Smith, liquor sales in Decatur on Sundays and a special election for mayor in Tontitown are among the items added to ballots in Northwest Arkansas as special elections.

Fort Smith voters will decide whether to approve an eight-year extension of two city sales taxes. The taxes appear on the ballot as one item for approval or rejection. The existing taxes raised $19.6 million for city bond repayment and utilities in 2021 and another $6.5 million for the city’s parks and fire departments, city finance figures show.

“The impact of the sales tax approval or disapproval by the voters can be summed up as follows: Approval means the residents want to continue to pay for Fire Station No. 11, 20 firefighters, replacement fire equipment and low insurance rates,” City Administrator Carl Geffken said Thursday.

“It also means better maintained and renewed parks; additional police officers and public safety equipment; and funding dedicated to consent decree projects. Disapproval means the sales tax rate in Fort Smith will decrease from 9.5% to 8.5%, saving those who shop in Fort Smith $0.10 on every $10 spent and none of the work described under approval will be done.”

The consent decree Geffken referred to is a January 2015 agreement with the US Department of Justice, the federal Environmental Protection Agency and the Arkansas Division of Environmental Quality. Under the decree, the city agreed to repair and upgrade its sewer system after decades of sewage runoff into local waterways, including the Arkansas River.

The city agreed in 2015 to spend more than $200 million over the next 12 years to upgrade its sewer collection and treatment. Later all parties agreed to give the city a five-year extension to 2032. Sewer rates would have to go up by 58% or more if the sales tax measure fails, city Utilities Director Lance McAvoy has said.

The taxes at issue are a 0.25% tax, which is split between the Fire and Parks departments, plus 0.75% for city bonds and utilities. If approved, the 0.25% sales tax would be renewed for the parks and fire departments, and the 0.75% would go to the Police Department and for repairs to the city’s sewer system.

In ballot measures in other places, Crawford County also proposes an eight-year extension of its countywide sales tax. Neither the Fort Smith nor Crawford County proposal would increase the local sales tax rates.

Midland, a town of 322 in southern Sebastian County, put a new 1% sales tax on the ballot there, election records show.

The need for a special election for mayor at Tontitown in Washington County arose after then-Mayor Paul Colvin Jr. resigned Dec. 22, citing frustration with the City Council and the declining health and then death of his father. Colvin is now a candidate in the Republican primary for state Senate District 31.

Contenders in the nonpartisan mayor’s race are Mayor Gene McCartney, appointed by the City Council after Colvin’s resignation, and Angela Russell, a resident active in local causes. McCartney was a member of the City Council at the time of his appointment as interim mayor. The winner of the special election will serve out the remainder of Colvin’s term, which expires on Dec. 31. The mayor’s office in Tontitown will be on the ballot again in November’s general election.