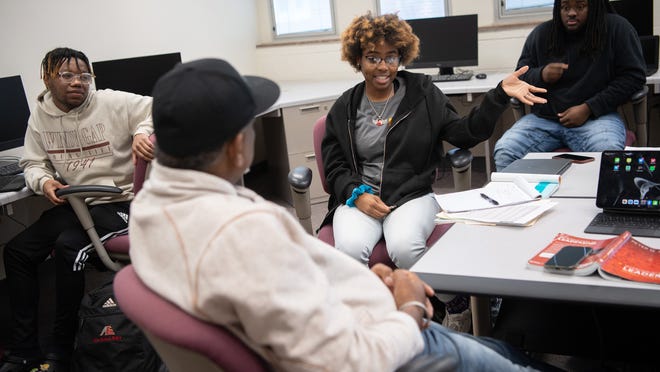 Every time Austin-East Magnet High School student Darius Jackson drove past the University of Tennessee at Knoxville campus, he was intensely interested in what kind of learning went on there. It was a huge presence right in the center of his city, but he really didn’t understand what a four-year university was all about.

“Most of the time whenever I was younger when I passed the university, I always thought it was like intimidating,” said Jackson. “I saw the big buildings and all the people walking by. I was kind of curious as to what’s going on here. And now, during my junior year, I’ve finally gotten this opportunity to kind of see the ins and outs of what the University of Tennessee is.”

He’s one of five Austin-East students enrolled in Project Excellence this year. The youth program brings students from his school onto the University of Tennessee campus for skills coaching and leadership development. Students work directly with program director Kimberly Hill and the Rev. Daryl Arnold from Overcoming Believers Church, the program’s first distinguished community leader lecturer.

About 3 of 5 Knox County high school seniors who graduated in May 2021 went on to college the following fall, a higher college-going rate than the state.

At Austin-East, Hill’s alma mater, only 37% of the 2021 graduating class went on to college or trade school, hitting a five-year low for the school and dropping nearly seven percentage points from before the pandemic.

A Knoxville native and graduate of Austin-East and Knoxville College, Hill is on a mission to make sure students from traditionally underserved populations have the resources they need to succeed in a college environment and the confidence to know they can.

Students in Project Excellence leave with up to five undergraduate credit hours in educational leadership and policy studies, which they can apply to several colleges in the state and beyond.

“It’s been fun getting to see who I am personally and the leader I can be in the future and get the chance to actually see what college looks like and attend school at UT,” said Marcus Mallory, one of the students in the program.

The students have played a key role in planning Healthy for the Holidays, a community event bringing awareness to the barriers some populations face when accessing mental health services. The event, which will feature Vols For Life Derrick Furlow Jr. and Alexis Hornbuckle, starts at 12:30 pm Saturday at the UT Student Union.

For Hill, the program is about more than the college credits.

“What they got beyond the college credit was a belief that they mattered,” Hill said. “Whenever they land on somebody’s college campus, they’re not learning as a spectator. They’re landing as a leader. So when they come to UT, they get involved. They have voice. They use that voice to impact things that impact them and their community.”

That exposure and confidence on a college campus can change a student’s perspective, Hill said. Students from traditionally underserved populations often have lower retention rates, meaning fewer of them come back after their first year of college. Some don’t have family members who attended college, so they are the first in their family to navigate the experience.

By getting a taste of college life with in-person, on-campus class, some of that learning curve is softened during Project Excellence.

“I want it to make leadership accessible to anybody that comes on this campus,” Hill said.

Right now, Project Excellence is only open to Austin-East students. But Hill said with enough support, the program could expand to other “flagship” high schools across the state. That designation is given by UT to high schools with many first-generation, low-income and/or underrepresented minority students.

Students from these high schools who attend UT are eligible for a last-dollar scholarship that covers tuition and mandatory fees for eight semesters.

Becca Wright (she/her) covers the University of Tennessee and statewide higher education for Knox News. You can be reached at [email protected] or 865-466-3731. You can follow her on Twitter @beccamariewrong. Our newsroom is dedicated to the public good, and you can support that by subscribing at knoxnews.com/subscribe.