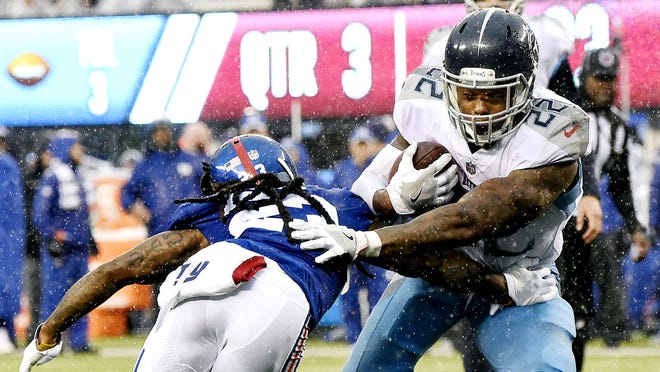 The Tennessee Titans had their first day of rookie minicamp Friday. It will conclude Saturday.

Here are a few takeaways from Day 1:

He was laboring during the early portion of individual drills and used an inhaler a couple times. He was later pulled from the period and had ice placed on his neck off to the side.

He returned for a few snaps in the first 11-on-11 session, but eventually went inside and didn’t return for practice.

Coach Mike Vrabel said he defers to Todd Toriscelli, the team’s director of sports medicine, on health situations with players.

“We gotta get these guys in here,” Vrabel said. “We got to study. We got to teach them our program. If he’s back out there tomorrow, we’ll coach him up.”

ANALYZING MATCHUPS:Who has the toughest strength of schedule in the NFL for the 2022 season?

HOW WILL TITANS FARE?:2022 Tennessee Titans schedule: Here are our game-by-game predictions

Willis settled down as the day wore on

Titans rookie quarterback Malik Willis mostly handed the ball off in early team period work, but threw more as the practice wore on.

‘EVERYTHING IS COOL’:Titans’ Malik Willis on Ryan Tannehill’s mentorship comments

In 7-on-7s, he attempted at least nine passes, completing seven. The zip on his throws, which was praised throughout the pre-draft process, was apparent. He threaded a pass over the middle to tight end Thomas Odukoya against tight coverage on one rep. But he was off on a go-route to Mason Kinsey down the sideline and threw too high for fifth-round rookie Kyle Philips on a short out route (though Philips corralled the pass).

“It got better in 7-on-7 and that’s all we’re looking for: making improvements and having a great attitude and being coachable and willing to learn,” Vrabel said of Willis’ day. “We just talked about not letting anything affect you. … There’s going to be the quarterback-center exchange (issues), the calls in the huddle that get called backwards and get called the wrong. The right guard is going to go to the right when he’s supposed to go to the left and he’s going to run into the tackle and the play is not going to look very good. We’ve been through it and I showed (Willis) examples of it last year. I said, ‘this is going to happen today. As much as we don’t want it to happen, it’s going to happen. We have to regroup.’ And I think he did that.

“It was good to see him take care of the football,” Vrabel continued. “Run when he needed to run. Try to show him all these things of how we want to play the game.”

Philips was arguably the most impressive player. He caught at least two passes from Willis in 7-on-7s.

The slot receiver appeared to get in and out of his breaks well during drills and had the kind of shiftiness that he displayed at UCLA, where he had 59 receptions for 739 yards and a Pac-12 leading 10 touchdowns in 2021.

Working out some kinks

There were at least a couple of false starts from the offensive line during the team period. Third-round rookie Nick Petit-Frere was among those who appeared to jump early.

There were also a couple shaky quarterback-center exchanges between Willis and Hayden Howerton, an undrafted rookie out of SMU.