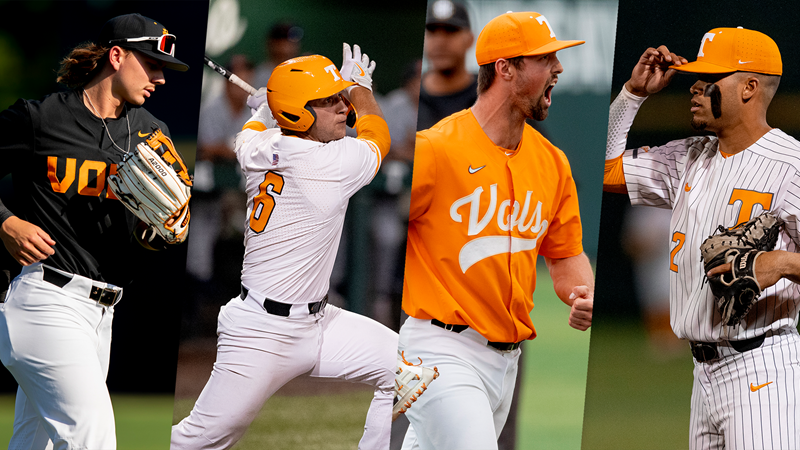 Four All-District honorees is the most for a single season in program history, doubling the previous high of two, which occurred in 2021, 2005, 2003 and 1998. The Vols’ four selections is tied for the second-highest number nationally and is the most among SEC schools.

CoSIDA’s Academic All-District teams recognize the nation’s top student-athletes for their combined performances on the field and in the classroom. District 3 consists of NCAA Division I schools in the states of North Carolina, Tennessee and Virginia.

First baseman Luc Lipcius, an Aerospace Engineering major in his undergraduate work who is now getting an MBA and Engineering graduate degree, made his third consecutive CoSIDA Academic All-District team. The graduate student achieved a 3.34 GPA in his undergraduate work and boasts an impressive 3.96 graduate GPA. On the field, Lipcius has played every game but one for the Vols and is batting .283. He has an incredible .464 on-base percentage thanks to his tremendous plate discipline which has drawn the lefty 49 walks, a total that is the second highest in the SEC and fifth-most nationally.

Another multi-year honoree from the Big Orange is catcher Evan Russell, earning his second All-District nod. Russell, also a graduate student, earned CoSIDA Academic All-District and All-America honors back in 2019 and achieves the award again after holding a 4.00 GPA in his Agricultural Leadership, Education and Communication graduate program. After making a position change this offseason to catcher, Russell has also been outstanding at the plate, posting the best slash line of his career at .295/.398/.584. He is just five hits away from a new career-high in single-season hits, while currently having played 20 fewer games than he did in 2021 when he recorded 49 knocks.

Preseason All-American and standout outfielder Jordan Beck received his first CoSIDA Academic All-District honor. The junior holds a 3.51 GPA in Anthropology and has been stellar on the field. Beck is currently hitting .308 with 13 home runs and 46 RBIs on the year and 26 of his 60 hits on the season have gone for extra bases. The Hazel Green, Ala. native currently ranks no. 17 on D1Baseball.com’s 2022 College Top 250 Draft Prospects list.

Middle infielder Jorel Ortega caps the Tennessee selections, garnering his third-career academic honor and first academic recognition outside the SEC. Ortega, a junior studying Sociology & Criminal Justice, owns a 3.31 GPA at UT. He has taken on a starting role this season and has blossomed into a strong contributor, hitting .310 and slugging .619 courtesy of 11 home runs, 11 doubles and four triples. Ortega has 52 hits on the year and has played a versatile role in the order, starting at five different spots in the lineup throughout the season.

Tennessee’s four honorees will advance to the 2022 CoSIDA Academic All-America ballot, voted on by CoSIDA members before first-, second- and third-team honorees are announced in June.

Where Alabama Stands in its Pursuit of Transfer Target Jordan Addison