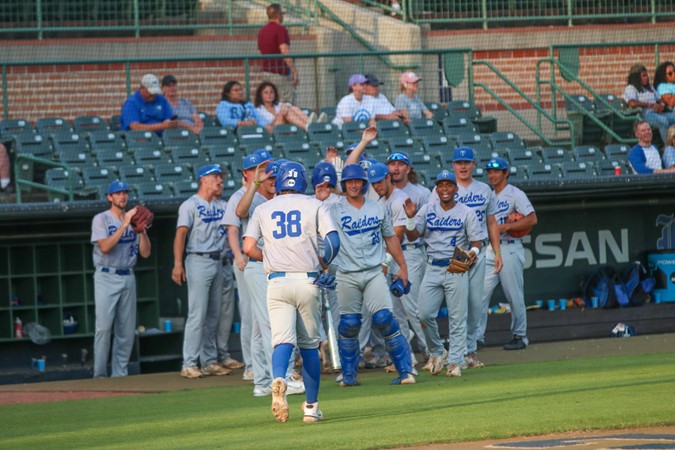 HOUSTON- The bad luck associated with Friday the 13th did not factor into Middle Tennessee’s (27-20, 15-10 C-USA) 7-0 victory over Rice (13-37, 6-19 C-USA) whatsoever. Peyton Wigginton’s complete-game shutout, seven runs off 13 hits on offense and a flawless game in the field led the Blue Raiders to one of their most complete games of the season.

Wigginton retired his first 11 batters faced until a fourth-inning, two-out Owl single broke up the perfect game bid. The southpaw remained strong by striking out three of the next four batters.

Briggs Rutter singled to start the second, advanced to third on a Brett Coker double and scored on Eston Snider’s RBI single for the first run of the game. Another MT leadoff single, this time JT Mabry in the third, started a two-run inning as both runs came across on another Coker double to make it 3-0.

Mabry reached for the third time in three tries on an RBI double in the top of the fourth, which Brian Dillingham scored to make it 4-0 MT. Three more Blue Raider runs scored in the seventh on Rutter’s RBI single, Coker’s RBI triple and a wild pitch to cap off the scoring.

Including striking out two in the seventh and three in the eighth, Wigginton did not allow a hit again until the bottom of the ninth when Rice threatened to break up the shutout. A one-out triple was the only runner Wigginton put in scoring position all night and a walk put runners on the corners, but a strikeout and a flyout secured the complete-game shutout.

Mabry finished 3-for-5 at the dish with one RBI and one run scored––his fourth multi hit in his last five games. Now with three consecutive multi-hit, three-RBI games, Coker drove in three runs on three hits while Rutter and Snider each had two hits.

Fausto Lopez set a new season high in assists at short with seven and was one away from matching his career best.