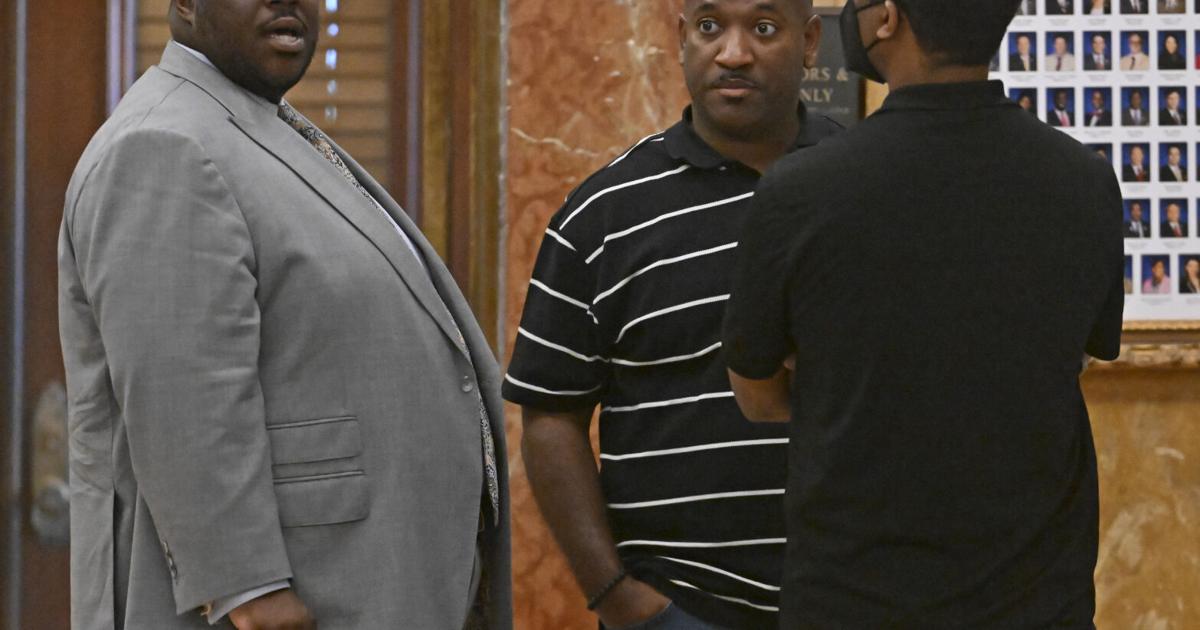 The Louisiana Democratic Party capped an afternoon of confusion Saturday by voting to endorse three main challengers to US Sen. John Kennedy.

The vote was an attempt to unify the party, but Gary Chambers Jr. later cried foul, citing the politics of race and noting that the party’s executive committee had favored him Tuesday over the other two Democrats, Luke Mixon and Syrita Steib.

Chambers, who is Black, said Katie Bernhardt, the White party chair, had changed the rules Saturday to ensure that he didn’t receive the full party’s endorsement.

“Katie Bernhardt told me last October that a Black man could not win statewide,” Chambers said. “She amended the bylaws to keep me from getting the endorsement.”

Chambers also said Bernhardt favors Mixon, who is White. Steib is Black. So the party’s tri-endorsement means that the party is endorsing two Black candidates and one White candidate, rather than just Chambers.

Told of Chambers’ comments, Bernhardt said she didn’t favor any candidate and had told Chambers that any candidate had to spend a full year campaigning to have a chance of winning. Chambers wasn’t yet a candidate last October.

“We had division going into the meeting,” Bernhardt said. “I think now we have even less.”

The tri-endorsement won by a 2-1 margin.

The comments by Chambers and Bernhardt came after an afternoon punctuated by confusion over conflicting resolutions during the Democrats’ meeting in the House of Representatives chambers in the State Capitol.

The vote means that Chambers, Mixon and Steib all have the party’s backing against Kennedy, a Republican.

“We are a large tent,” Lisa Diggs, a party delegate from New Orleans, told her colleagues in advance of the vote that led to the tri-endorsement. “We are not in a position to have this party in Louisiana divided by choosing one candidate.”

Louisiana Democrats have not sent someone to the US Senate since 2008, Gov. John Bel Edwards is the only statewide elected Democrat and Republican holding two-thirds of the seats in the state Legislature.

The party also voted to endorse all four Democrats running for a New Orleans-based seat on the Public Service Commission. The executive committee had recommended Davante Lewis.

Chambers, during a video presentation, said he would energize voters to defeat Kennedy, citing recent elections where half of Black voters stayed home.

“He (Kennedy) does a terrible job of making decisions that actually benefit the people of Louisiana,” Chambers said in a presentation to Democrats meeting in the House of Representatives chamber in the State Capitol. “We have a senator who constantly votes against the interests of Louisiana.”

Kennedy will be seeking a second six-year term when voters go to the polls on Nov. 8.

Chambers highlighted his background as an activist in Baton Rouge who challenged the traditional power structure there.

Get the Louisiana politics insider details once a week from us. Sign up today.

Chambers said he favored women having the right to an abortion and ending the rule that allows filibusters to block votes on controversial legislation.

Mixon described his background at the US Naval Academy who became a fighter pilot who saw action over Iraq, Afghanistan and Syria. He is now a Delta Air Lines pilot.

Mixon said he is a strong supporter of early childhood education, proper funding for police departments and boosting efforts to transition from a fossil fuel economy.

“We are certainly disappointed if not disgusted by the representation of John Kennedy,” Mixon said.

Steib said she has turned around her life after spending 10 years in prison. She runs Operation Restoration, which helps women transition from prison to society.

None of the candidates mentioned the FBI raid on the Florida home of former President Donald Trump because their video presentations had been recorded beforehand.

Each of the three Democrats faces an uphill battle against Kennedy. National handicappers say he is heavily favored to win.

As of June 30, Kennedy had raised $28.2 million compared to only $2.2 million for his main Democratic challengers. In the three months preceding June 30 alone, Kennedy raised $5.5 million.

During his first term, Kennedy voted for the tax cuts pushed through Congress by then-President Donald Trump that favored big companies. He also supported Trump’s failed efforts to dismantle Obamacare and voted against President Joe Biden’s spending plan to revitalize the national economy and his program to spend $1 trillion to rebuild the country’s infrastructure.

Kennedy is the only senator running for reelection this year who voted against certifying Biden’s electors on Jan. 6, after pro-Trump insurrectionists stormed the US Capitol in a failed attempt to overturn the election outcome. He has Trump’s endorsement.

Mixon is making that vote a prime reason why Kennedy ought to be sent home.

“He betrayed our democracy,” Mixon said.

Kennedy joined all Republicans in voting last week against the Inflation Reduction Act, which aims to lower prescription drug costs, boost the effort to curb harmful emissions and promote green technology and to pay for the costs by raising taxes on some billion-dollar corporations.

Lewis, a staffer at the Louisiana Budget Project, said the Public Service Commission has to do a better job of promoting renewable energy.

He did not mention the Democratic incumbent, Lambert Boissiere III.

Two other Democrats are running: Willie Jones and Gregory Manning.

David Armand will be honored with 23rd Louisiana Writer Award at…

Tropical Depression 13 forms near South America, NO threat to SW…